Taking it Old School at the Rebelle Rally

The gals who participate in the Rebelle Rally challenge themselves to ditch their cell phones, laptops, and GPSs. With only a map and a compass to guide them, they go off-road for 10 days of grueling navigational competition.

I competed in 2018’s 1,600-mile Rebelle Rally as part of Team Free Range Dames. I drove a customized 2012 Toyota Tacoma with a manual transmission. I stepped—well, drove—way beyond my comfort zone. I dove head-first into a world of off-road uncertainty to test my abilities. Even if I failed miserably, I told myself, I would get up, dust myself off, and be proud of just getting out there. I learned a lot.

This year, I returned to the Rebelle as media. I watched 38 all-women teams battle their way across the California and Nevada deserts, topping off their treks amidst the legendary Glamis sand dunes flanking the Mexican border. These women traveled through 1,500 miles of dirt, rock, and sand. These women challenged themselves for 10 straight days—eight days of competition, seven days of actual points-scoring.

“From torn-up tires to a toasted clutch, things happen.”

Like all women who compete in the Rebelle Rally, this year’s contestants said “yes” to stepping out of their comfort zones. They agreed to allow event officials to confiscate all electronic navigational equipment. They navigated the entire rally with just topographic maps, a compass, and their methodical minds.

Here’s what the Rebelle Rally has taught me so far—both as a participant and as a spectator. Let’s call it my “rebellations.”

Sisters are doing it for themselves. As women, many of us help everyone around us and we fail to concentrate on ourselves. We sometimes become so tired or complacent, we develop a fear of the unknown. The Rebelle Rally is just the remedy.

Because we’re worth it.

This rally is about empowering yourself. It’s about making yourself a better version of who you were. It’s about learning from the good, the bad, and the challenging parts of the competition and transferring that into daily life moving forward.

I’ve found that after competing in the Rebelle Rally, I’ve grown. I’ve become more confident and sure-footed—as a competitor, woman, professional, and as a person. I’ve met countless other Rebelles who feel the same way. 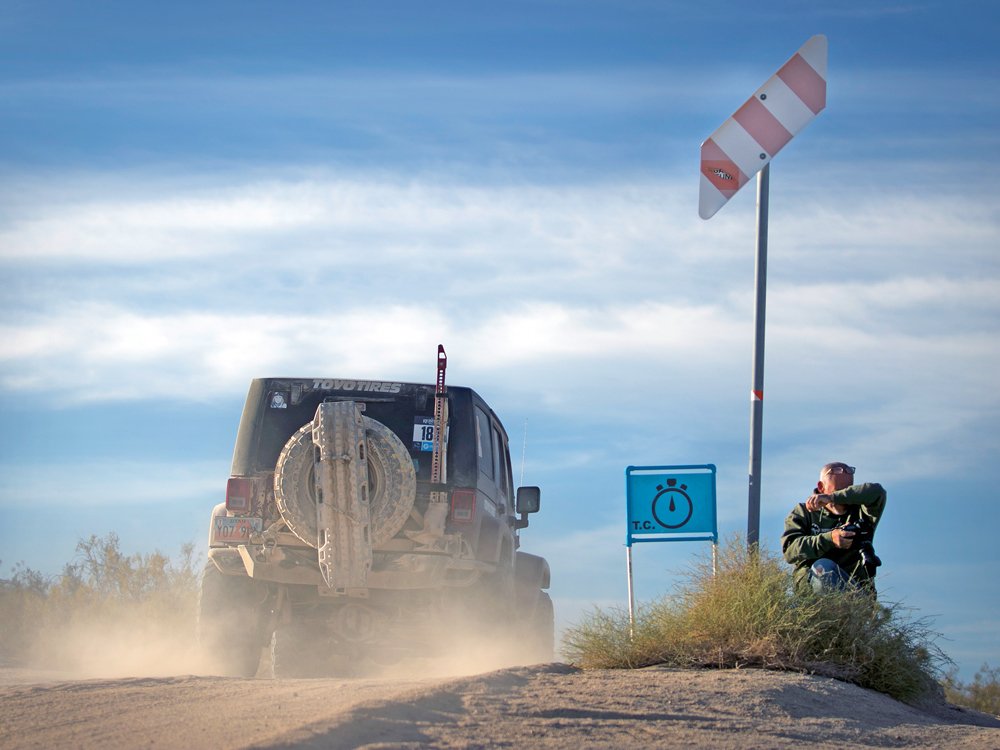 There’s no time to be tired.

A single cowbell clangs slowly around base camp at 5:00 a.m. sharp. This is the alarm clock.

Drivers dash to get their keys. (Vehicles are secured in an impound lot overnight. No team gets access before 5 in the morning.) Meanwhile, navigators eagerly anticipate receiving coordinates to plot on their maps. There’s a flurry of activity, even though it’s pitch dark outside.

The first team takes off from the start line at 7:00 a.m. Each team follows in due time. Helmets on, maps plotted, they’re ready to go! Each day of competition is typically 10-11 hours long and teams need to return to base camp before their designated time is up. 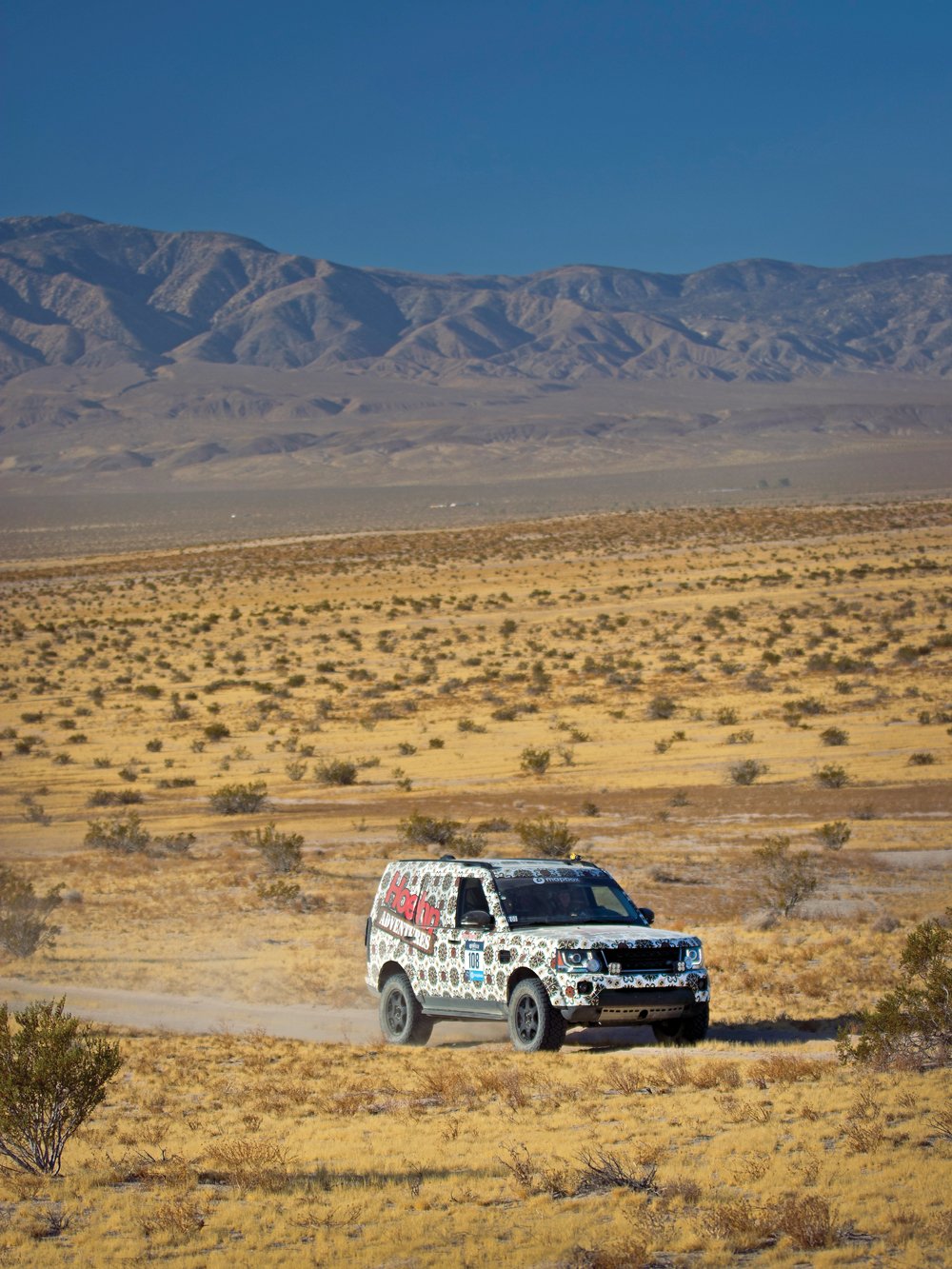 From torn-up tires to a toasted clutch, things happen. For example, Team Naviguessers was having a great competition when their OEM clutch wanted no more.

“I’m still pretty bummed about [the clutch],” Alicia said of her maroon Subaru Crosstrek. “We did get to run the last day in Glamis. We even beat the Honda team that day, which took Second Place overall.”

There are folks to help you deal.

“I didn’t want to tie up the mechanics in case another team needed them,” Alicia continued. “They even offered to drop us off at another mechanic but it might have been days before we got it fixed.

“In the end, the Rebelle mechanics cranked out [the clutch replacement] in probably three hours? It was so impressive, with all the sand blowing everywhere during the process!”

From teammates to staff, the Rebelle Rally is a community of folks who are there to make sure everything runs smoothly, everyone has fun, and the competitors stay safe and healthy. 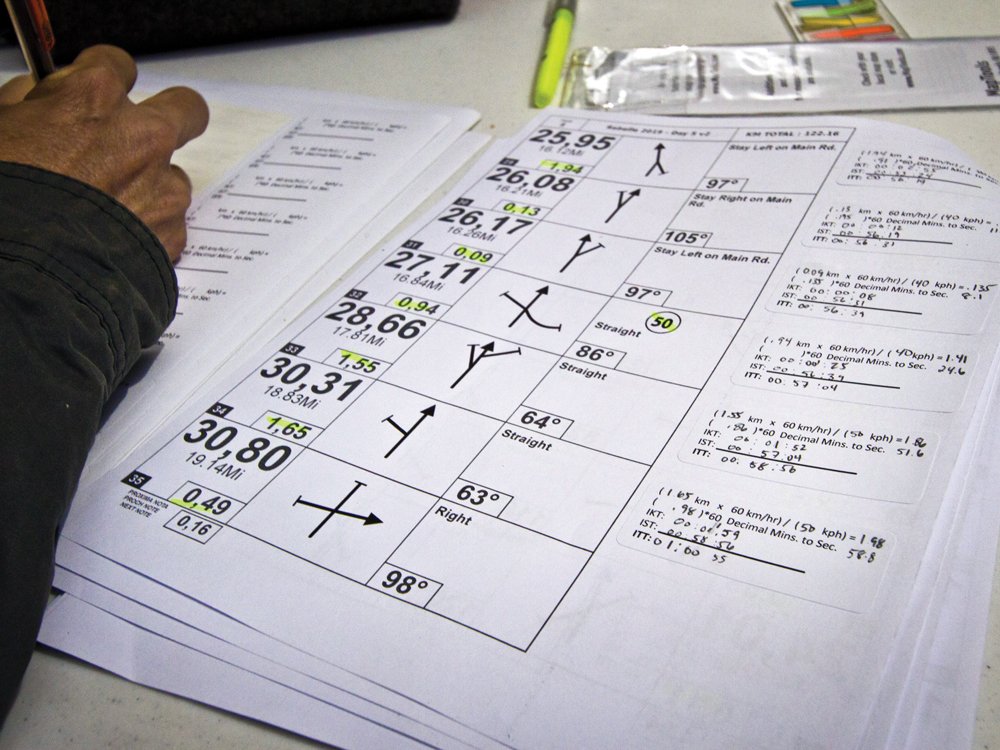 A Rebelle calculates an enduro challenge. 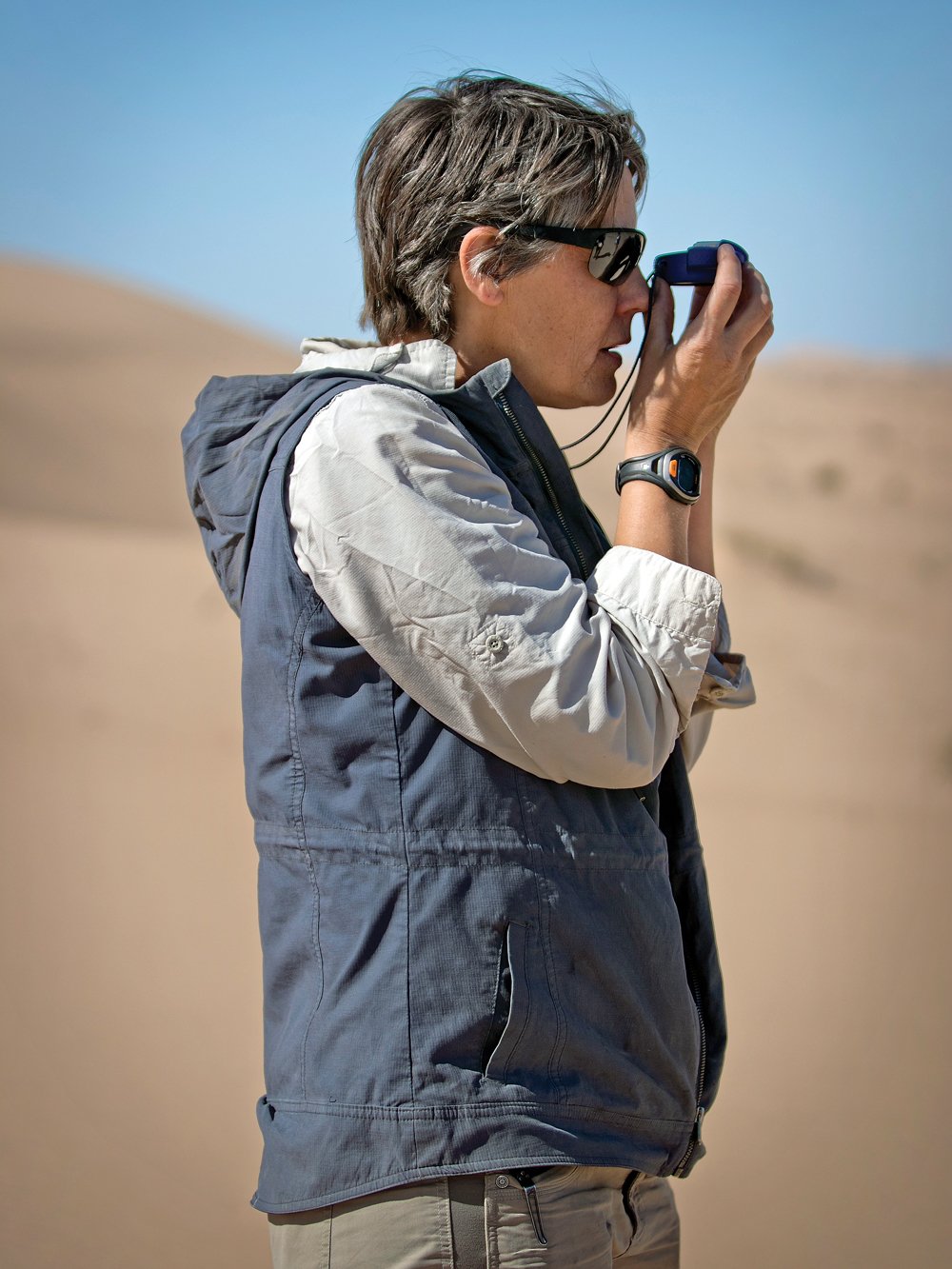 Rachael Ridenour using a compass to navigate her way through the desert. 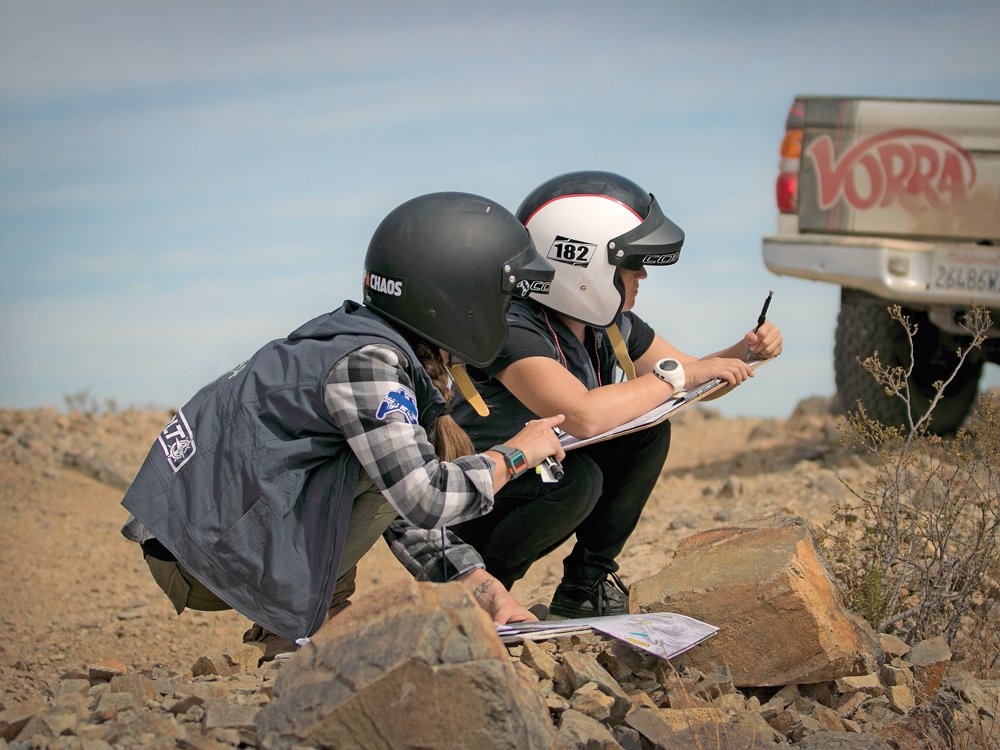 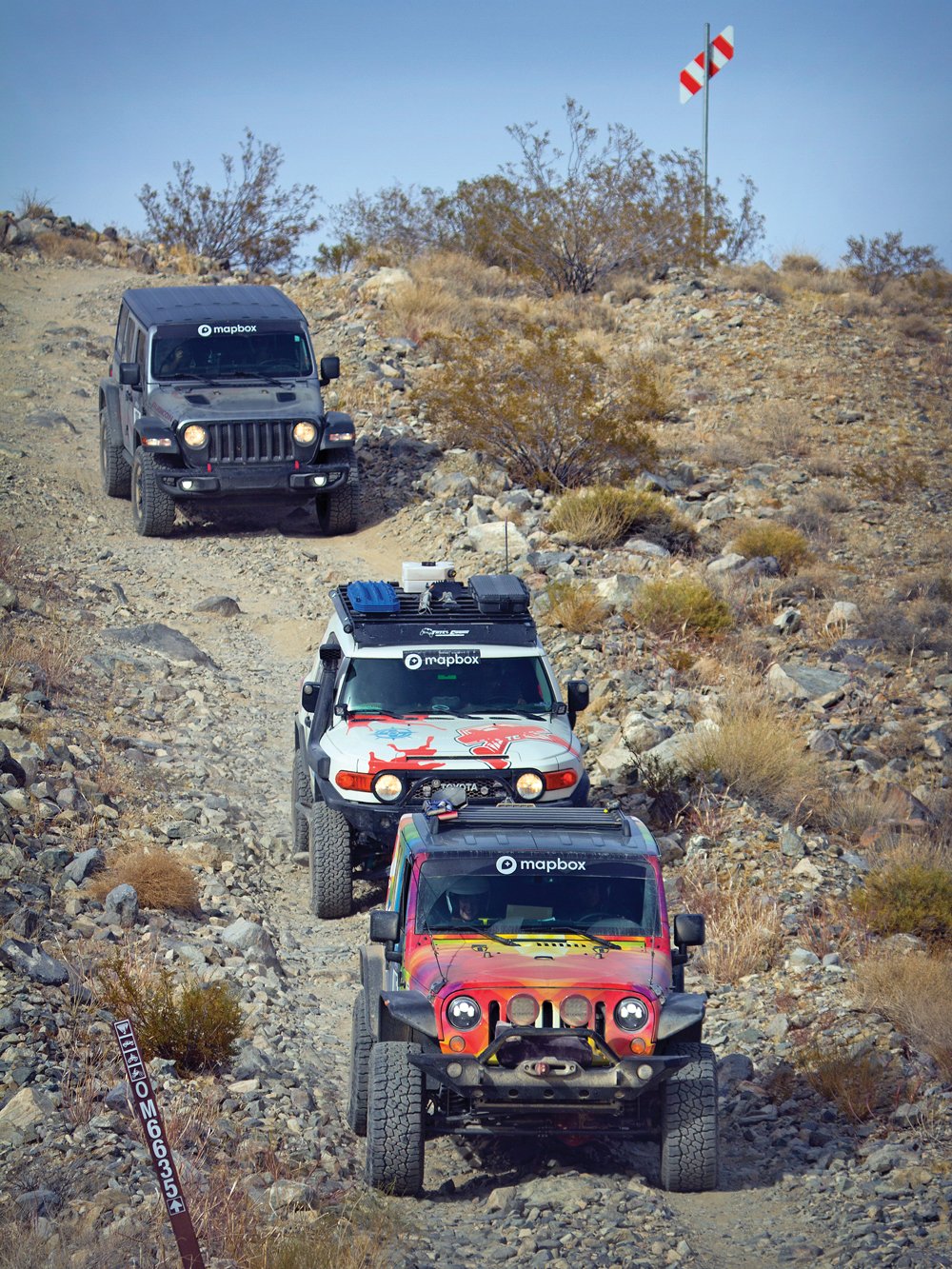 Competitors navigate down a hill to find their next checkpoint.

When: Every year during October. 2019 was the fourth year running.

Where: Every year the rally starts north of Lake Tahoe, spanning off-road territory north of the Mexican border. Course details are top secret and change every year.

Who: This year, 38 all-women teams. That’s 76 women, with ages ranging from 23 to 71. This event brings in women from all over—gals from the U.S., Canada, Australia, South Africa, and even Norway. 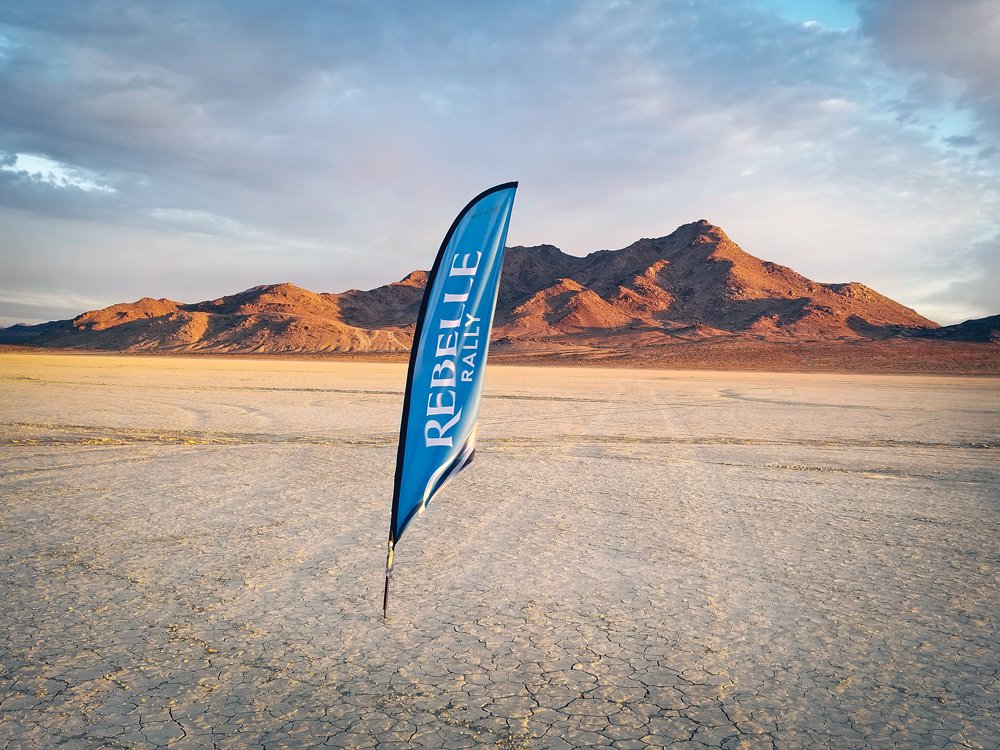 The Challenge: The Rebelle Rally tests each team’s grit, determination, and willingness to succeed. Topographic maps and a compass are the only navigational tools allowed. Speed is just one objective. It’s also about precision, time management, and driving skill.

The Mission: Every morning each team is given a list of coordinates for hidden checkpoints. It’s their job to find as many as they can, in order, during each day of competition. Teams must record each checkpoint as they “close.”

All teams get enduro challenges too: time, speed, and distance mini-rallies. There’s a lot to keep track of!

Teams who garner the most points at the end of the rally win their class. In addition to best-in-class, other awards include the bone stock winner, the rookie award, the international cup, and even a team spirit award.

The Vehicles: Teams may use a bone-stock 4×4 or crossover vehicle, or a vehicle that is fully customized. The only caveat? It must to be street-legal. Participants may rent, borrow, or own the 4×4 or AWD crossover for the rally. Diesel vehicles are allowed.

This past year, Rebelle Rally vehicles included 30 4x4s and the largest crossover turnout in Rebelle Rally history—8 CUVs. Toyota teams showed up in force. They had their largest showing yet.

This Year’s Vehicle Firsts: Mitsubishi and Rolls-Royce OEM manufacturers each brought a vehicle for a team to rally. It was the biggest OEM presence ever: seven different manufacturers.

Cost: In addition to the registration fee, competitors must pay for rental equipment—like a checkpoint tracking device, a tracker for their vehicle, and satellite phone. They must also save up some dough for fuel.

Varying Degrees for Checkpoints: Large green flags, which are mandatory stops and usually worth the most points; smaller blue flags or poles; and black checkpoints, which are invisible

In 2019, an adaptive athlete competed in the Rebelle Rally for the first time. Karah Behrend, a medically retired Air Force veteran, piloted the Mitsubishi Eclipse Cross as her teammate, Rachael Ridenour, navigated.

Together, they were Team Record the Journey, a non-profit organization that focuses on outdoor photography, adventure, and other rehabilitative experiences for veterans.

Mitsubishi Corporate stepped up and partnered with several other sponsors to make the vehicle accessible for Karah. Adaptations included hand controls and a grab bar on the Mitsu’s A-pillar so that Karah could transfer in and out of the driver seat. The vehicle also included custom brackets and mounting points to help Rachael to secure Karah’s two wheelchairs. One chair was her daily, while the other was an off-road rider made by Grit Freedom Chair to traverse through dirt and sand.

Karah’s energy and drive are infectious. She is an inspiration. She’s confident, competent, and a heck of a cool cat.

Editor’s Note: A version of this article first appeared in the March/April 2020 print issue of Tread Magazine.