Get the Magazine
Features, SUVs, Vehicles
Text and Photos by Bryon Dorr You can usually find Carl Montoya alongside his employees at Nitro Gear & Axle and Just Differentials in Cashmere, Washington. When not at work, Montoya is out in the mountains off-roading, skiing, mountain biking, or camping with his family. He has an affinity for top-spec, world-class Toyotas and has owned and built a wide range of Toyota off-road vehicles, from 70 Series Land Cruiser rock crawlers to custom TRD Pro 200 Series Land Cruisers, and recently a superclean 2019 Tacoma and this 1987 Land Cruiser Troop Carrier.

“This 1987 Toyota Land Cruiser HJ75 lived its former life in the outback of Australia.” 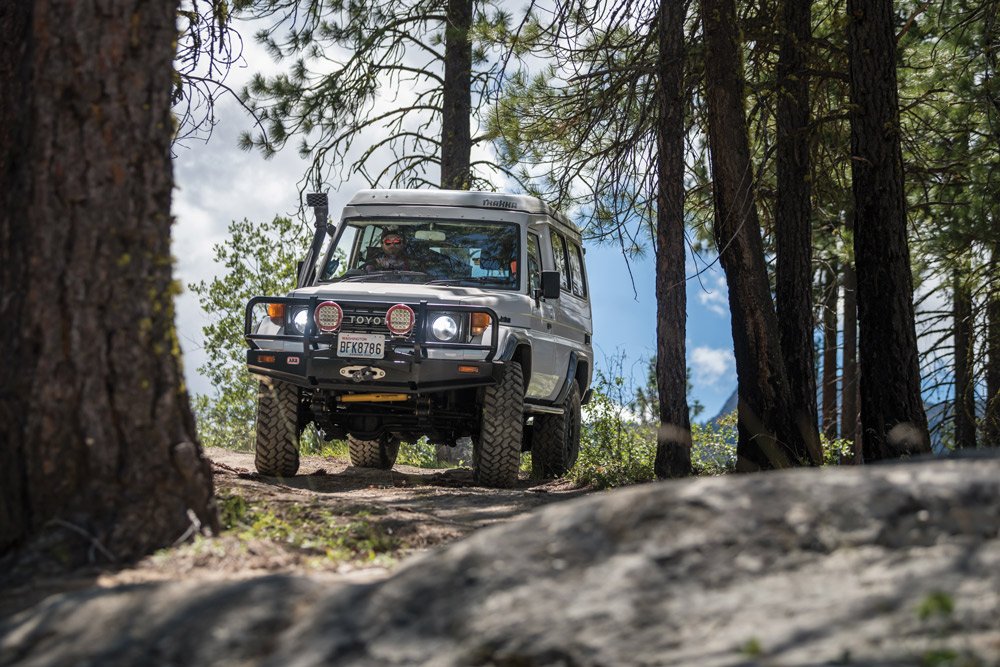 This 1987 Toyota Land Cruiser HJ75 lived its former life in the outback of Australia. It was actually converted as a factory-fresh vehicle into a pop-top camper by the Trakka Bushman company. Trakka specializes in pop-top conversions and is known the world over for its quality design.

Adventure is calling, and this Troopy is ready to answer the call.

Montoya found this vehicle in the U.S. in rough condition. The obvious deficiency was a non-running factory diesel engine. The not-so-obvious deficiency with this vehicle was the deep cancerous rust. If Montoya had known the full extent of what he was getting into he might not have taken on this project. But, as you can see from these pictures, Montoya fully resurrected this Trakka Troopy from the dead.

The first step was to get the body back into OEM-quality shape before starting on all the mechanicals and upgrades. Sadly, the rust was a much bigger issue the deeper into the project the team got. In the end, it took an excruciating six-plus months to do the in-depth bodywork and repaint the truck.

“It was actually converted as a factory-fresh vehicle into a pop-top camper by the Trakka Bushman company. Trakka specializes in pop-top conversions and is known the world over for its quality design.” 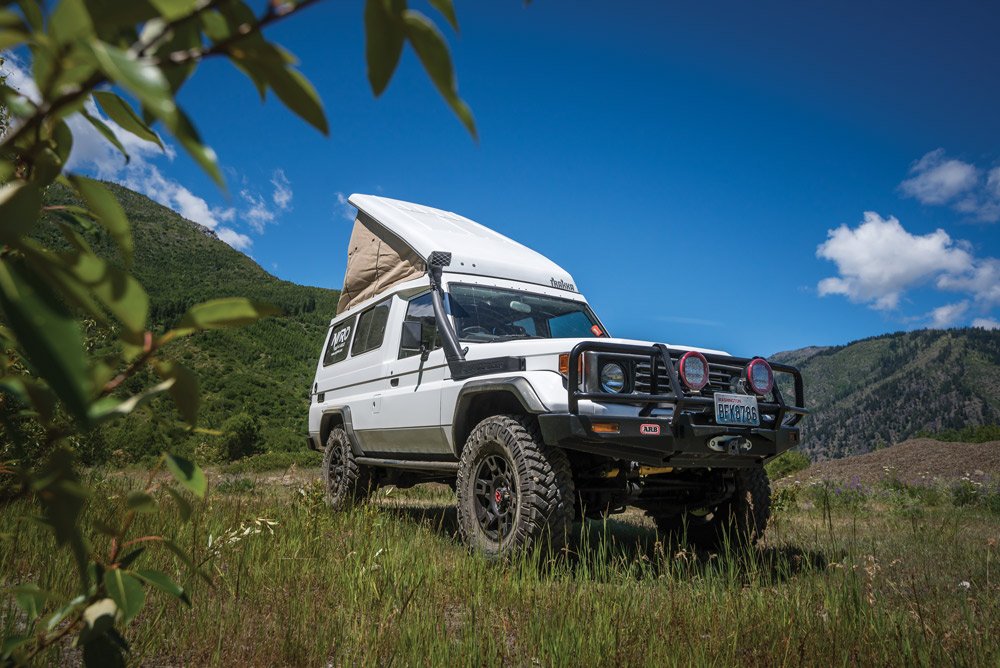 Home is wherever you can find a flat spot to park and pop the top.

Besides the bodywork, which included extensive roof and gutter reconstruction, the Troopy also needed much of the fit and finish bits replaced and/or upgraded. New window and door seals and gaskets were installed throughout. Some new glass was needed and many of the door hinges needed to be replaced. Up top, a new custom tent was fabricated for the pop-top. It was made with durable UV stable Sunbrella fabric and has mesh and solid openings on all three sides for ventilation.

Under the hood of this old machine was a blown Toyota 2H diesel engine. Montoya decided he wanted a bit more grunt than that old tiny powerplant would provide. Specifically, he wanted to go highway speeds through the mountains with a fully loaded camper.

The answer was a new Toyota 4.2L 1HD-FT straight-six 24-valve diesel engine by Torfab. Torfab of course upgraded the engine with a “Grunter Extreme” GTurbo, PDI intercooler and radiator. This combo produces about 450 lb-ft of torque, a considerable upgrade over the 177 lb-ft that the original 2H in this Land Cruiser put out. 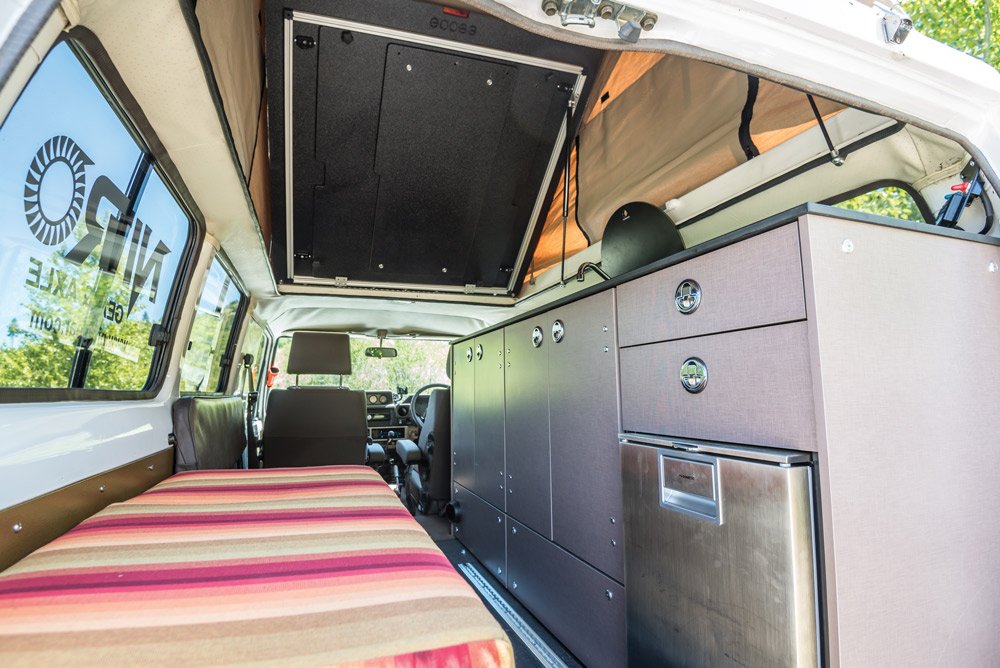 This compact camper system offers up all the comforts of home.

One of the trick new custom parts on this Troopy came about from necessity. Once the new engine was installed it was quickly determined that the factory snorkel just didn’t allow enough air into the engine. To get around this, and keep the functionality and look of the Snorkel, Torfab fabricated a custom air intake that allows the driver to switch between normal mode and snorkel mode. This lets the truck breathe easy when cruising the highway and also utilize the snorkel when needed in the dust or when fording streams.

The Magic is Underneath

Since this Land Cruiser is going to not only be an adventure rig for Montoya, but also a showpiece for his gearing and differential business, you know the axles received the full overhaul and upgrade program.

Up front this Troopy got a fully upgraded Toyota 9.5 axle. The front axle has been rebuilt with Nitro 4.10 ring-and-pinion, chromoly 30/30 Birfield kit, chromoly hub gears, a Front Range Offroad late-model Tacoma/FJ brake conversion, and an ARB AirLocker. This setup is not only stronger in every way but also provides this Troopy with a 3-inch-wider front track width. 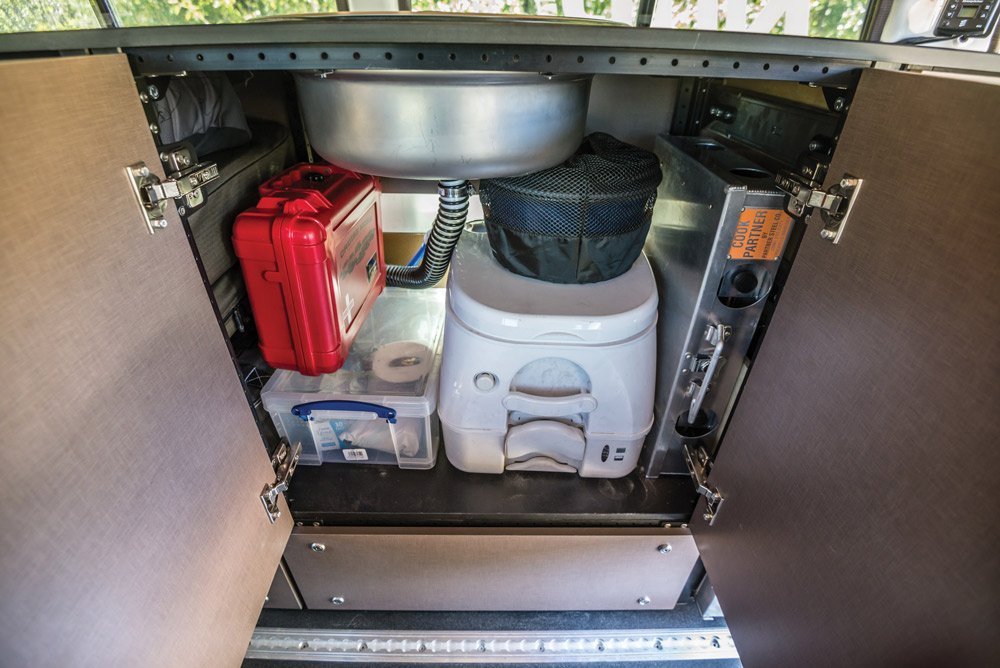 This overland rig even includes a kitchen sink, stove, and toilet.

The rear axle is also a Toyota 9.5 with a similar build as the front. It has also been gusseted and has new OE drum brakes installed. Nitro 1.5-inch wheel spacers allow it to line up with the front track width for optimal off-road capability.

Now that the Troopy was rust free, looking good, powered up, and rolling right, it was time to protect all that goodness from the hazards found off road. Up front an ARB bumper is installed, along with ARB Intensity lights and a Warn winch. Custom DC Fab rock sliders protect the sides of the truck from trail damage. Out back an Expedition One/Cruiser Outfitters rear dual swing-out bumper with custom bike rack is fitted. Under the truck there is a custom rear frame–mounted skid plate to protect the fuel tank and other vulnerable bits under this long vehicle. An ARB twin compressor rounds out the off-road upgrades.

This Troopy is ready to traverse the globe, but without being outfitted with a proper interior and camper system it wouldn’t be very comfortable doing so. The big upgrade in the front of the truck are a set of scheel-mann Vario seats. These are some of the most comfortable seats you’ll ever sit in, and are perfect for long trips off the beaten path. They even have built-in seat warmers. 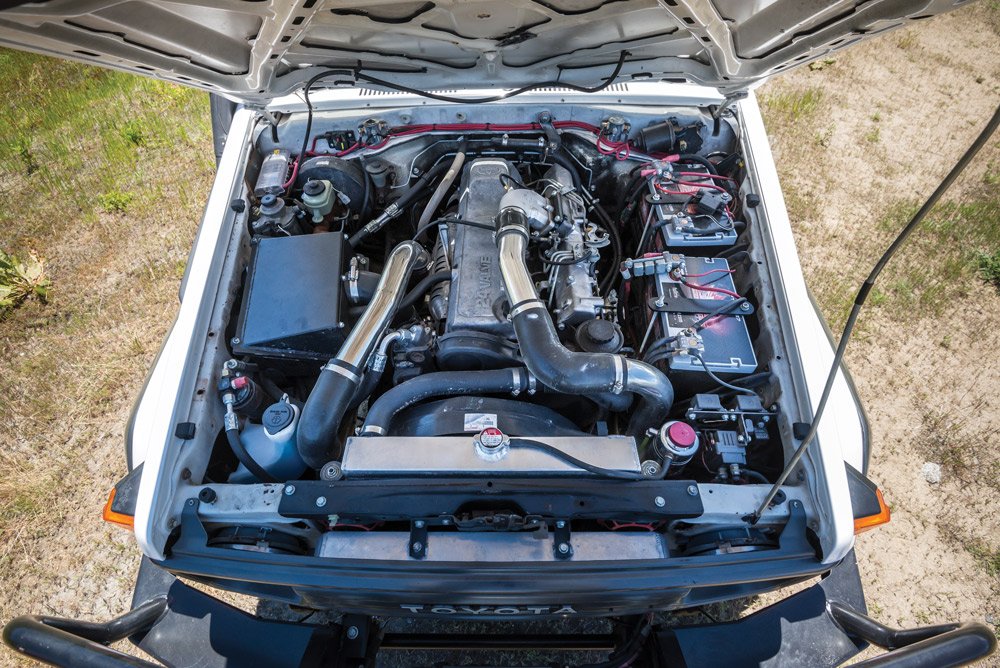 This Troopy is also fully outfitted with all the comforts of home. The entire interior has been built out by Goose Gear, with their new S-Series cabinet products, to fully optimize the space for living and travel. Up top there is a custom strut-mounted Goose Gear sleep platform that splits 70/30 for easy use inside the Land Cruiser. Below there is a tall cabinet system on the driver side with integrated fridge, sink, cartridge toilet, and lots of secure storage. On the passenger side, a long, low Goose Gear bench houses the battery and offers up even more storage. Montoya also retained one of the original jump seats from the troop carrier for his kids to travel on. 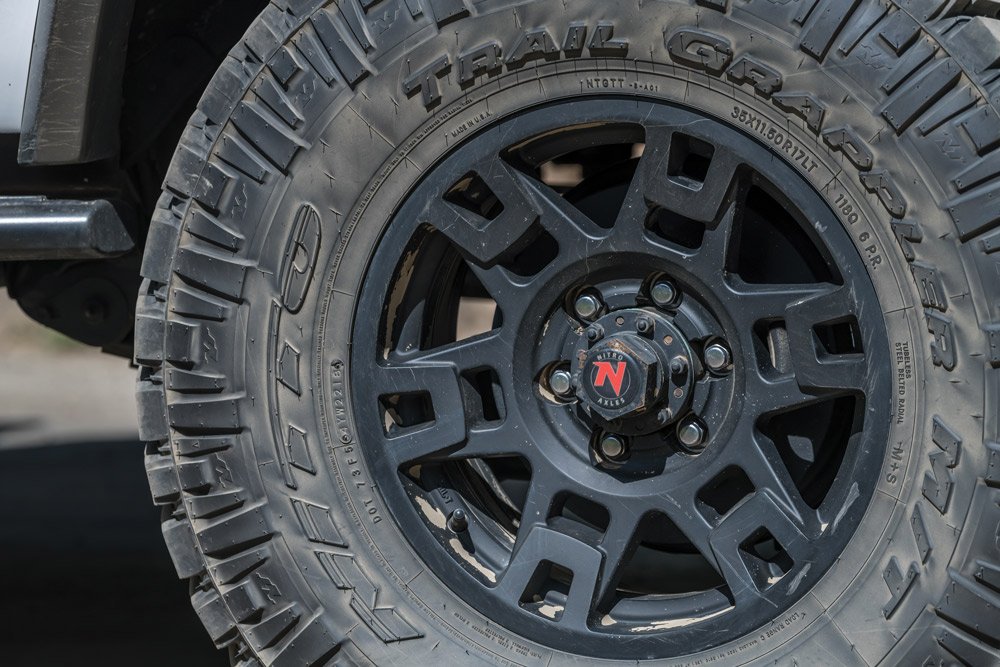 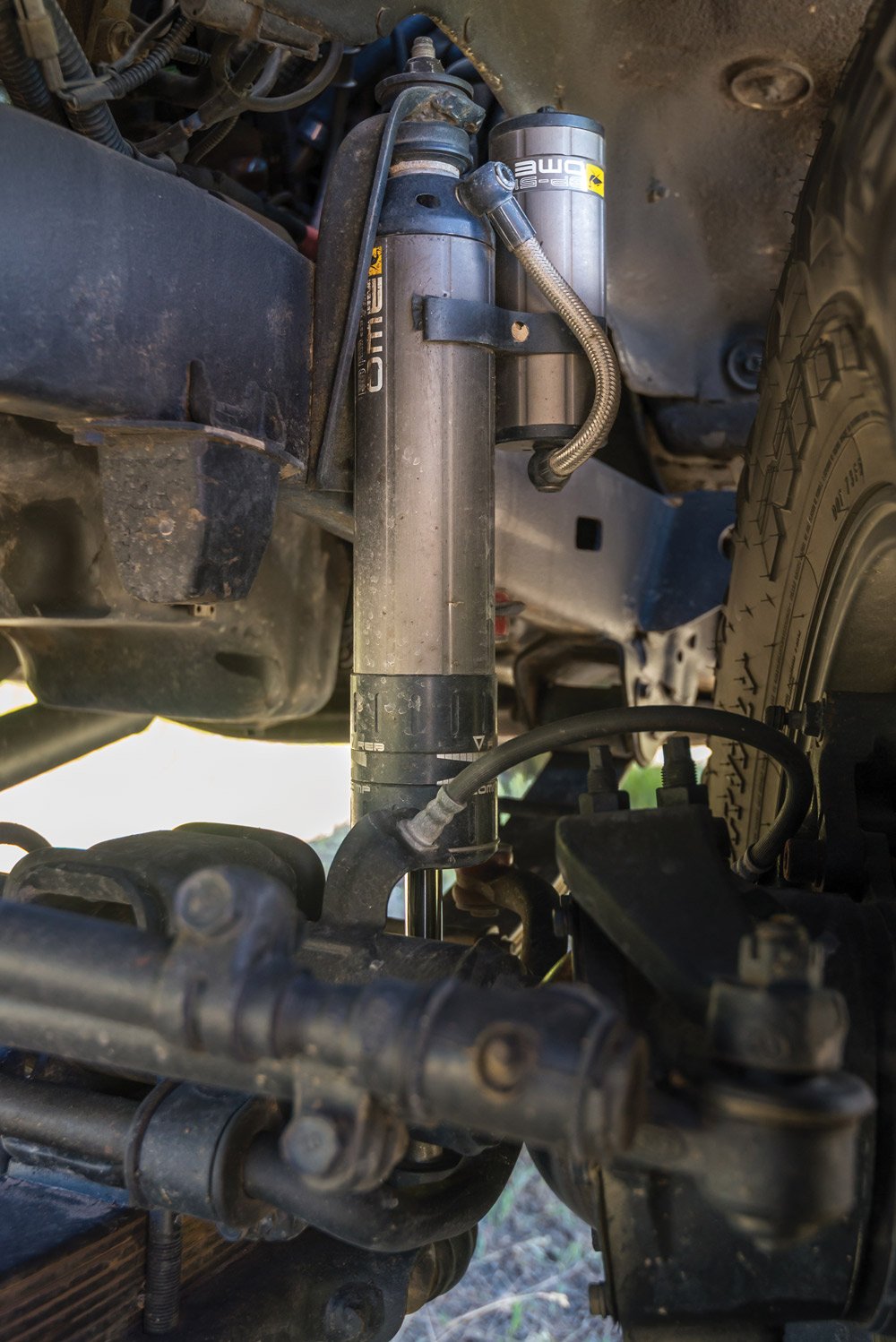 Probably the most common upgrade to a Troopy are OME shocks, but most don’t get the highend BP51 models.

Rounding out the camper build are matching memory foam cushions for the bed, bench, and lower convertible sleeping deck. Keeping things toasty year round is an Espar diesel furnace system that is fueled off the dual main tanks of the truck. The finishing touch is an Expedition Essentials drop-down table/stove mount on the rear door.

All legendary vehicles need a name. Montoya named his resurrected—maybe even restomodded—Trakka Troopy “Cobby Bob.” This name comes from the infamous Australian bushman and caretaker at Old Andado Station. Montoya met Cobby Bob during an off-road trip across the Australian Outback in 2016. Up, down, or sideways this Land Cruiser gets it done.

Keep up with the adventures of Cobby Bob the Trakka Troopy by following @NitroGears on social media.