“Camels over the ridge,” called out our expedition frontrunner Chris Collard on the radio, after ascending a tall dune. The excitement in the five Jeep convoy was palpable, as we had traveled for four days in a swath of the great Simpson Desert without any sighting of wildlife, except for two birds.

Camel tracks frequently dotted the ridges of red sand, along with the zigzagging and squiggling tracks of numerous small desert bugs and rodents, such as the tiny nocturnal Mulgara mice, the Spinifex hopping mice, and sand sliding skinks—these left trails that were similar to that of a snake, which set my heart on fire. Australia has close to 100 venomous snakes—although it’s said that only 12 are likely to inflict a wound that could kill you. I remembered this fearful fact distinctly each evening, as I scouted for firewood when we set up camp and when we built a large fire to cook on and for warmth during the often-frigid nights in this barren landscape. 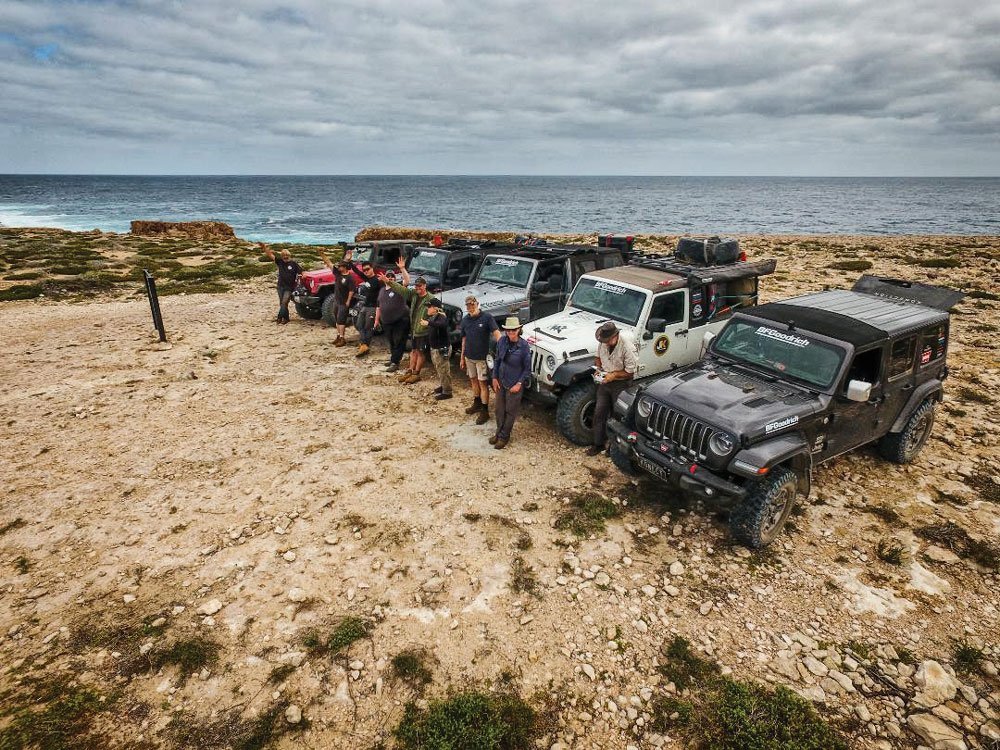 The team of 14 came together to retrace tracks of the first east-west crossing of Australia 50 years on.

My Aussie teammates scoffed at my apprehension about the deadly snakes and the lengthy list of poisonous spiders. They assured me that since it was winter in the Land Down Under, most were hibernating. One teammate tried to get me to sleep under the stars near his uncovered bedroll, as proof that there were “no worries”. I left that to him; Michael Bowen, the founding editor/publisher of Australia’s Jeep Action Magazine, is an experienced outback adventurer and, although I envied the majestic view of the constellations and the Southern Cross, that was his panoramic window to the world each night. I chose to zip into the protection of my tent and burrow into a sub-freezing sleeping bag.

We were a team of 14 who came together to retrace tracks of the first east-west crossing of Australia 50 years on, and travel across the bowels of this continent on a course that led us through a strip of the untracked Simpson Desert across some 1,100 dunes. 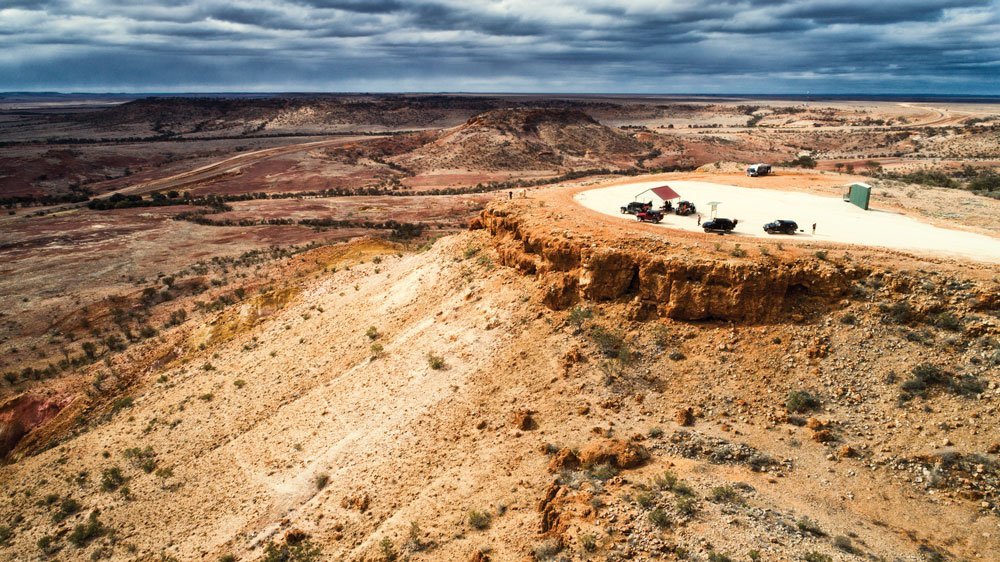 It was an epic adventure in 1969, when Ian McDonald and John Eggleston and a handful of mates set off on the first-ever, full-vehicle crossing into the unknown with a couple of Jeep vehicles and a Rokon off-road motorbike for scouting. Then, distances between towns or sheep stations were measured in days or weeks, and few tracks spanned its northern region. It is the same today in a few stretches of this continental landmass.

“Davidson pulled in the talents of American Chris Collard, of Adventure Architects, who is well-known as an international 4WD adventurer, journalist, and photographer and an inductee to the Off-Road Motorsports Hall of Fame.”

McDonald and Eggleston, two of three surviving members of the original team, joined on as historians for the recent crossing of the Simpson, as a cadre of like-minded, multi-national 4WD experts came together to follow the original route from coast-to-coast, knowing the tracks of the first team would be long gone and that no one had completed the harsh journey across this swath of the world’s largest desert in 50 years. This line of travel hosts the largest collection of north-south facing dunes on the planet and is situated in aboriginal lands that have been closed to the public for decades. The caravan’s crossing was perpendicular to the natural lay of the dune fields, which are also the tallest in the world. 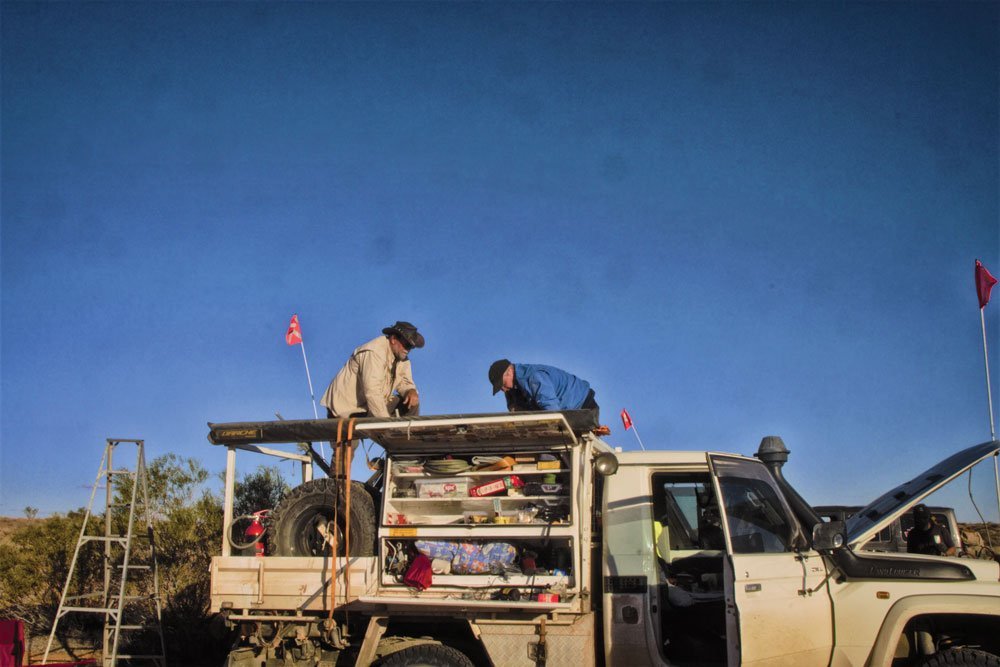 You can never be too prepared in braving the harsh environment of the Outback.

The trek required vehicles that were set up for the 4WD ardors of the trip carrying the right recovery gear, as well as a team of drivers who were capable at the wheel and experienced in the severities of outback and backcountry travel, plus skilled trip leaders.

This year’s expedition leaders spent nearly a year planning the logistics to motor the 6,000km-long route that would be without services and support in the desert, and where fuel, preservation of the Jeeps, water, food, and gear would be critical elements to the team’s survival and success. In total, the trip required more than 12,000 km of driving the Jeep convoy vehicles from their launch and prep location in Melbourne to the start, and back to Melbourne after the finish. 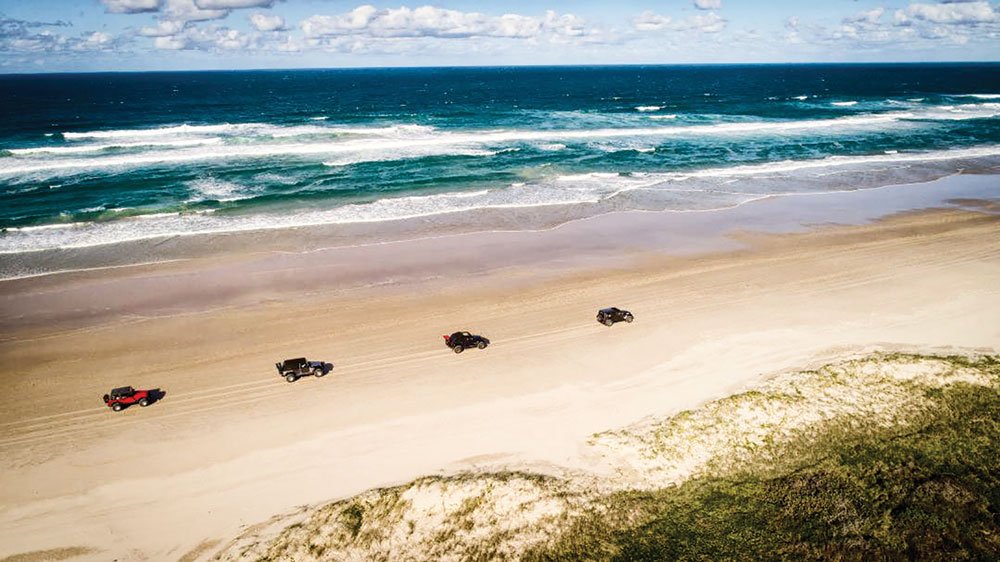 It was Vaughn Becker, of Queensland, who had the dream to bring the historical trip to life for its 50th anniversary. Becker, a life-long Jeeper, was fascinated with the original trip and reached out to the three surviving team members and others, including Ben Davidson, editor-in-chief of Jeep Action and a member of SEMA’s Media Award Judging Committee.

“Although all were experienced in off-road driving, two rigors created the greatest challenge in the desert: As the sand warmed in the heat of the day and became softer than in the cold mornings, it made ascending the dunes more difficult.” 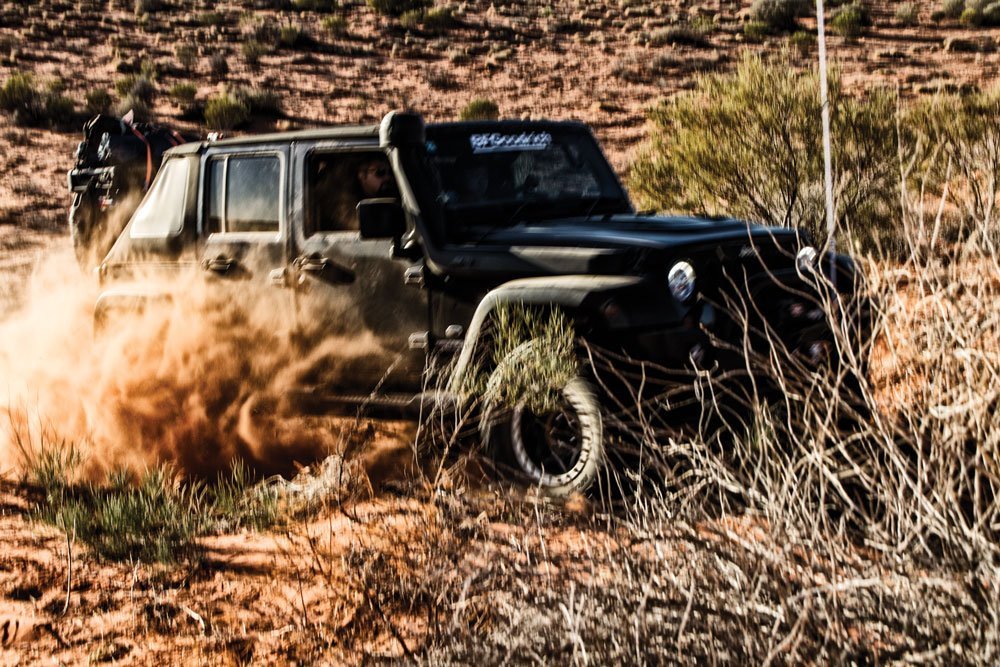 Davidson pulled in the talents of American Chris Collard, of Adventure Architects, who is well-known as an international 4WD adventurer, journalist and photographer and an inductee to the Off-Road Motorsports Hall of Fame. Collard joined on as the expedition leader and helped Davidson garner sponsor support to equip the five Jeep convoy vehicles of different vintages that were set up for the rigors of remote and rugged travel with long-range fuel tanks, BFGoodrich tires, Warn Winches, and a collection of other important add-ons. 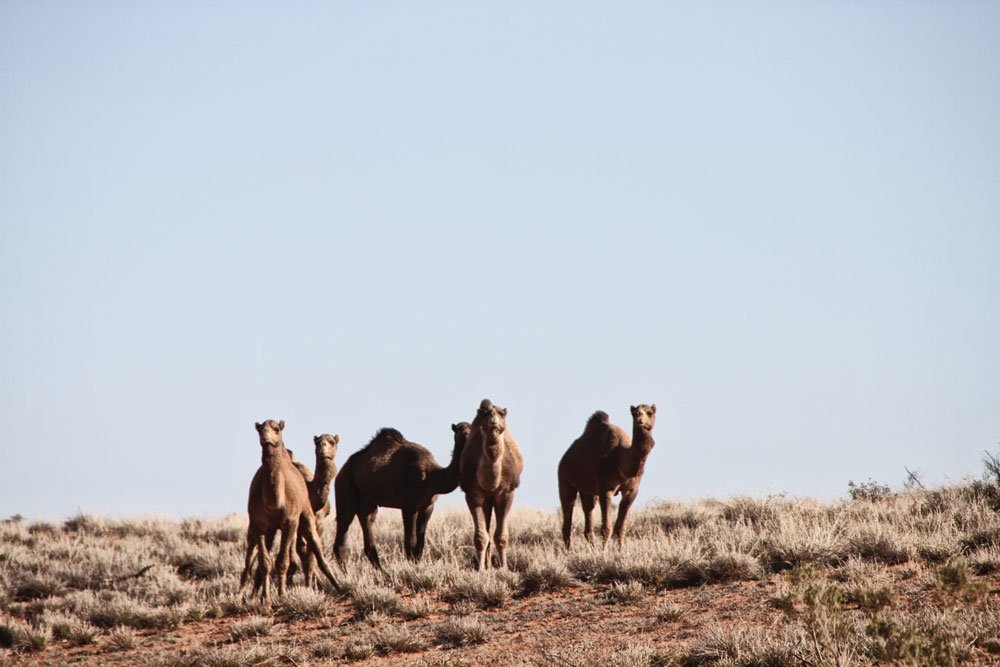 U.S. 4WD experts Rick Pewe and Sue Mead, along with Justin He of China, and Canadian cinematographer Derek Redmond joined the team as journalists, while Alan and Karen McMullen of Victoria, added their 2009 Jeep JK8 and four-wheel-drive talents to the group. The McMullens are well-known off-road competitors in Australia, participated in international expeditions, and owned a Jeep aftermarket accessory business. 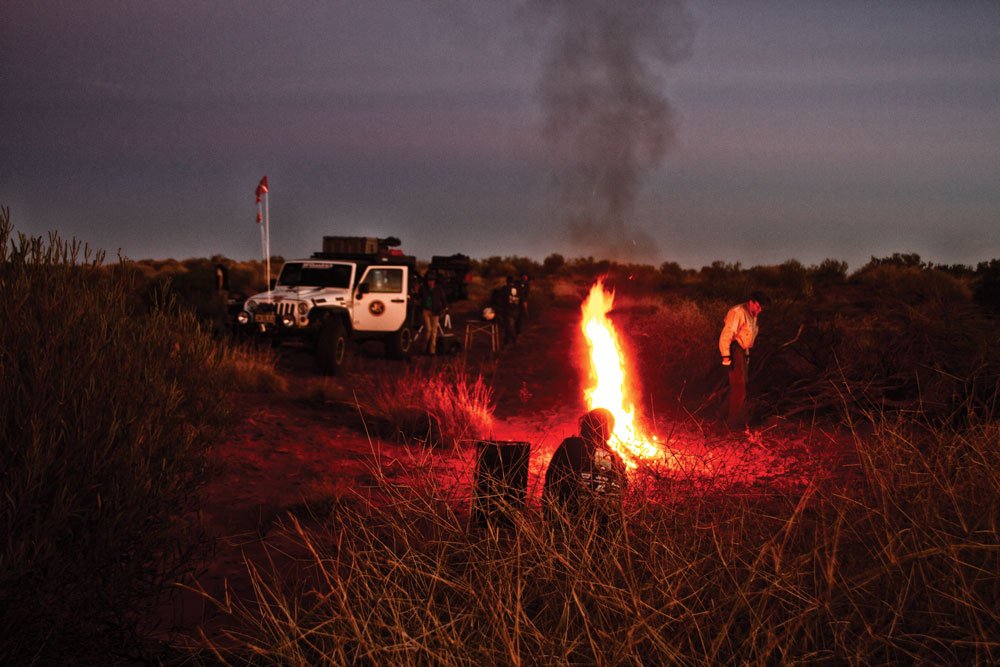 Starting at the Pacific Ocean near Byron Bay, New South Wales, the most easterly point on the continent, the off-road squad turned their wheels toward Steep Point, the most westerly point, retracing the original route through the Outback enclaves from Birdsville to Alice Springs, and visiting the iconic landmarks of Uluru (Ayer’s Rock) and Kata Tjuta (The Olgas), Fink Gorge National Park, and through the remote lands of western Australia that is punctuated by a few roads only that provide access to its vast expanses and dramatic landscapes.

Thirteen team members completed the rigorous crossing of the Simpson in the quintet of Jeep convoy vehicles, supported by Dave “Emu” Parkinson, of Brisbane. Parkinson, whose 2016 Toyota Land Cruiser served as a mobile refueling base—the fourteenth member. The electrician, who has worked with a number of oil companies in hazardous areas, provided 800 liters of fuel carried in 55-gallon drums that were delivered to three predetermined locations (the start, the middle, and the end of the desert) where the team reconnoitered with this Australian legend. 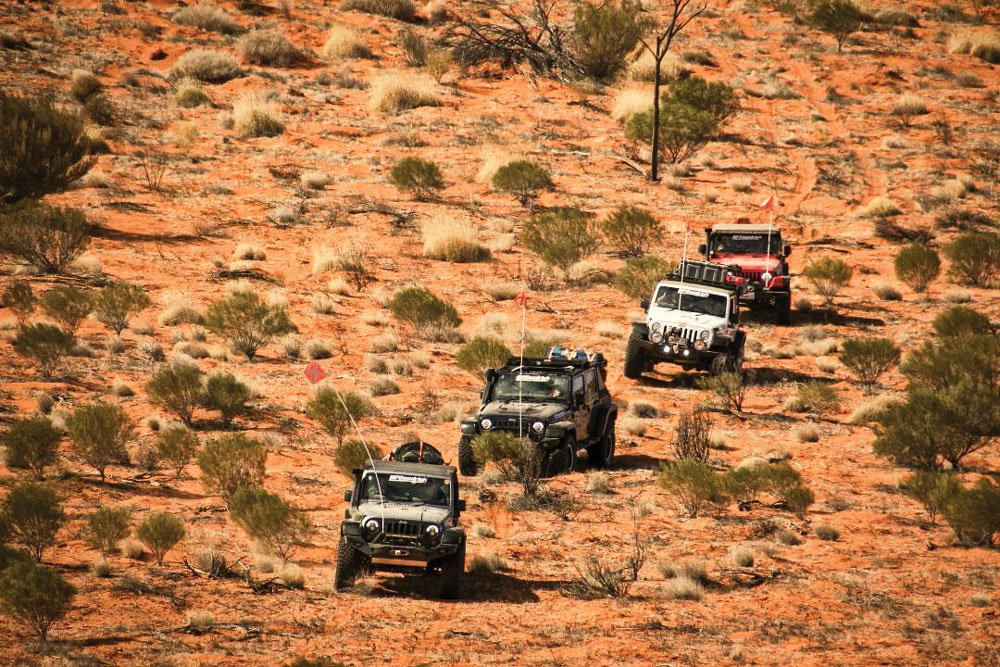 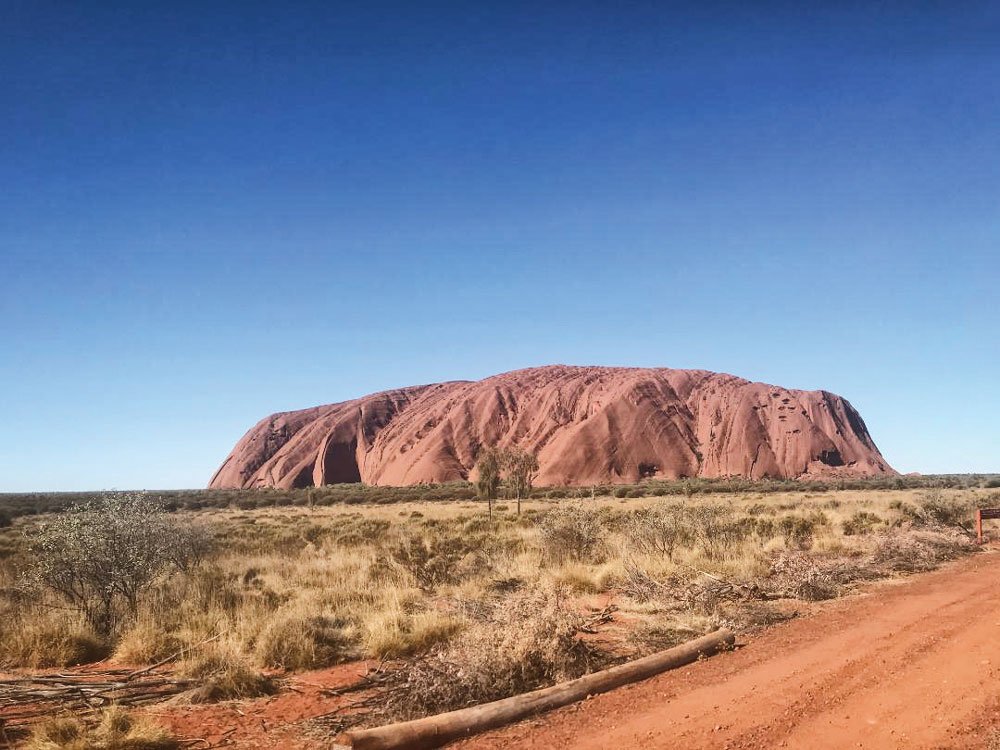 The Great Simpson Desert is the land of spinifex. Our crossing took us over 1,100 dunes.

Although all were experienced in off-road driving, two rigors created the greatest challenge in the desert: as the sand warmed in the heat of the day and became softer than in the cold mornings, it made ascending the dunes more difficult; and the plethora of spinifex, a spiny-leaved tussock-forming grass that proliferates in the desert, which required that the Jeep convoy travel at slow speeds and often affected the best tracks for dune crossings. As a result, it was not uncommon to put the winches, tow straps, and Maxtrax to use when vehicles became stuck.

“This year’s expedition leaders spent nearly a year planning the logistics to motor the 6,000km-long route that would be without services and support in the desert …”

After six days in the desert, the team descended the final ridge that led to Old Andato Station, a remote cattle station and historic homestead in the Alice Springs region. Considered the last remaining homestead of its kind, the original building dates to the ’20s and still stands today. Last occupied by Molly Clarke, who died in 2012, she kept the historic site open during the last years of her life to accommodate visitors who wanted to learn about the pioneer life.

Camping at Old Andato was a glamorous affair, as we used wood to heat a water boiler in one of Molly’s outbuildings and were able to enjoy a hot shower. Moving on to Alice Springs, some members departed and we became a team of nine who completed the remaining 3,000 km, motoring through the bush and the Outback along stretches of wide dirt track, as well as some paved roads. Here, camels appeared on the roadside and kangaroos, free-range cattle and wombats made driving a dangerous affair. Evidence of accidents are frequent along the roadways. 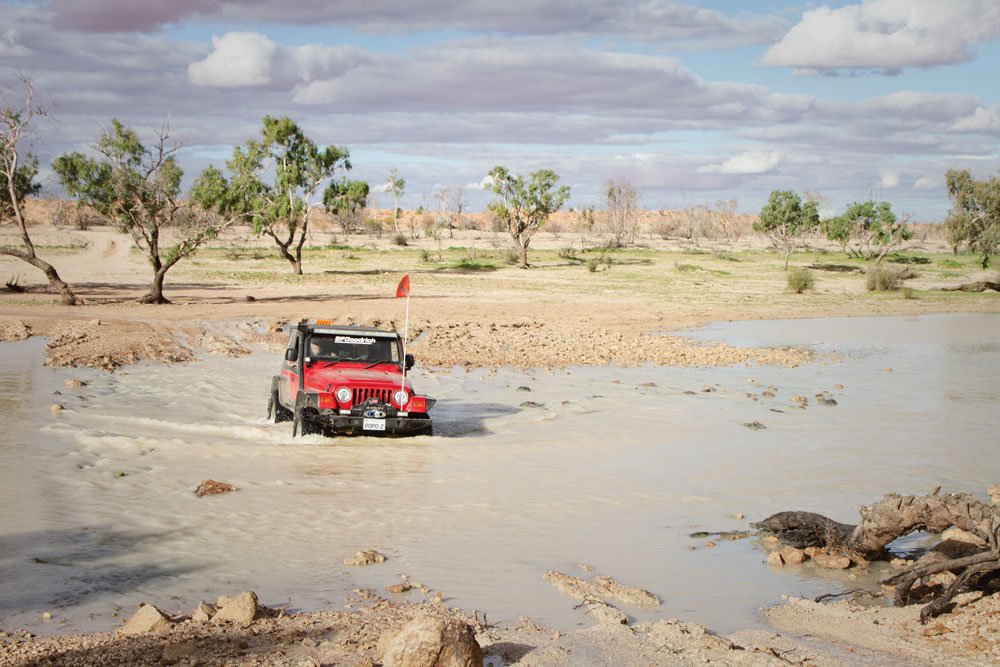 The original 1969 expedition was fraught with plenty of hazards along the way. In a land where time stands still, the same challenges faced their modern-day 2019 counterparts.

The team reached Steep Point with great fanfare and, once again, aired down our BFGoodrich tires to accommodate the sandy tracks that led to a rocky promontory along the Indian Ocean that is the westernmost point of land on the continent. Retracing the historical first east-west crossing of Australia 50 years later taught us that many things are different today: the comfortable ride with the modern-day features and upfits of our Jeeps; the plethora of maps and landscape detail available from Google Earth and other sources; as well as, satellite phones and frequent Internet connection available in small towns and even in remote fuel stations, with the exception of the six days of travel through the Simpson Desert. However, much was the same: the challenge of adventure for man and machine and the lure of traveling to the lands that begin where the pavement ends; and the simple pleasures of building a camp fire and going to bed under the stars.

Jeep Convoy
of the Crossing This special East-West Australian adventure was 50 years in the making and required special territorial permissions as well as specially outfitted vehicles. The expedition’s organizers worked closely with governing agencies and were granted special permission to pass through the aboriginal lands.