→ Submit your rig and win a Tread magazine feature of your truck! ←
Get the Magazine
Features, Vans & Campers, Vehicles
Story by Mercedes Lilienthal
Photos by Spencer Whitney 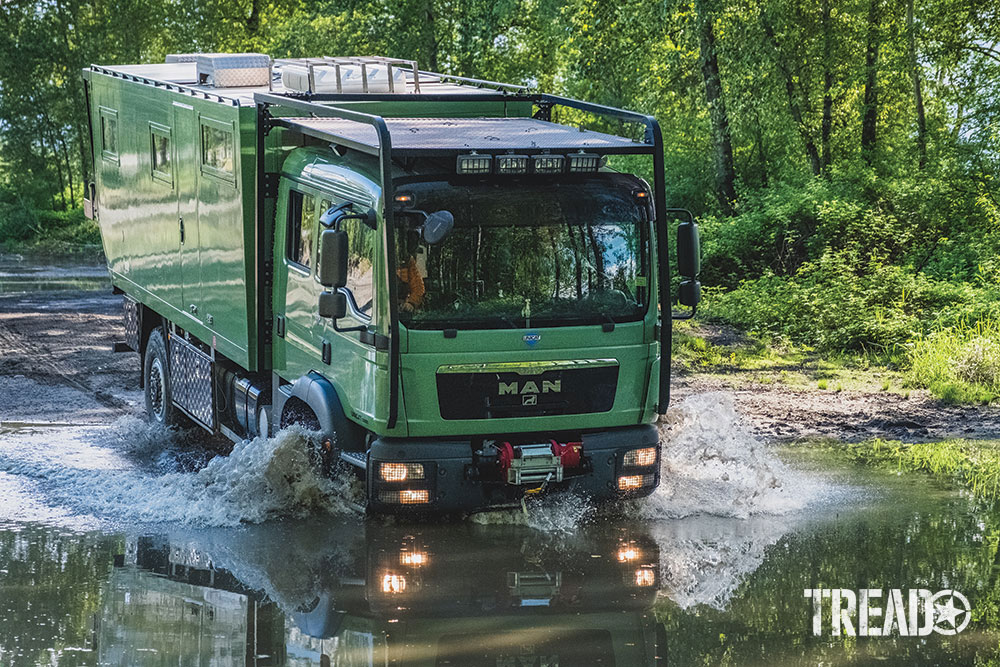 A house on wheels … yet so much more

Even before he owned the mint green MAN truck, Canadian resident A.J. Leveille was always into cars. He and his father built a hot rod as his first vehicle. In fact, he still owns it. Leveille was also in the Boy Scouts from ages 5 to 17. That laid the foundation for his love of the outdoors.

“In university and beyond, I became very involved in hiking, mountaineering and trekking abroad,” said Leveille. Backcountry trips led him to build his Land Cruiser FJ40 camper “many years ago before ‘overlanding’ in North America was a ‘thing.’” 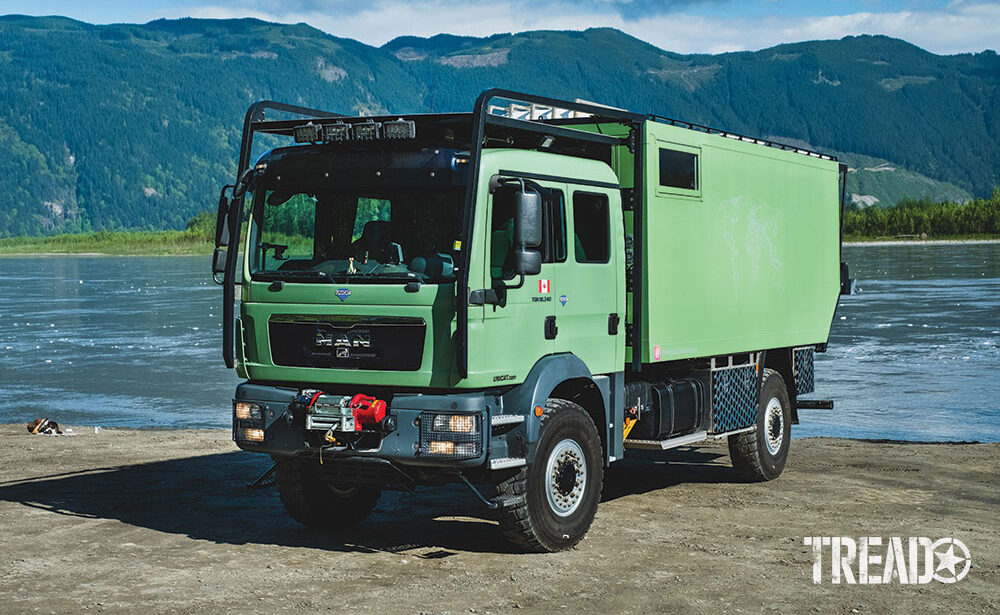 A Unicat TC59 is an expedition truck designed for taking the whole family on extended international trips.

Leveille’s love for adventuring through Canada’s vastness and beyond was a major reason he purchased and customized a used 2011 TGM 18.340 four-wheel-drive mint green MAN truck that housed a TC59 Unicat camper. He wanted to travel the world for extended periods of time with his family of four.

From Halifax to Vancouver, northern British Columbia to the Arctic Circle and even Chile to Tierra del Fuego (the tip of South America), this trusty truck has given Leveille and his family shelter, miles of smiles and constant adventure. 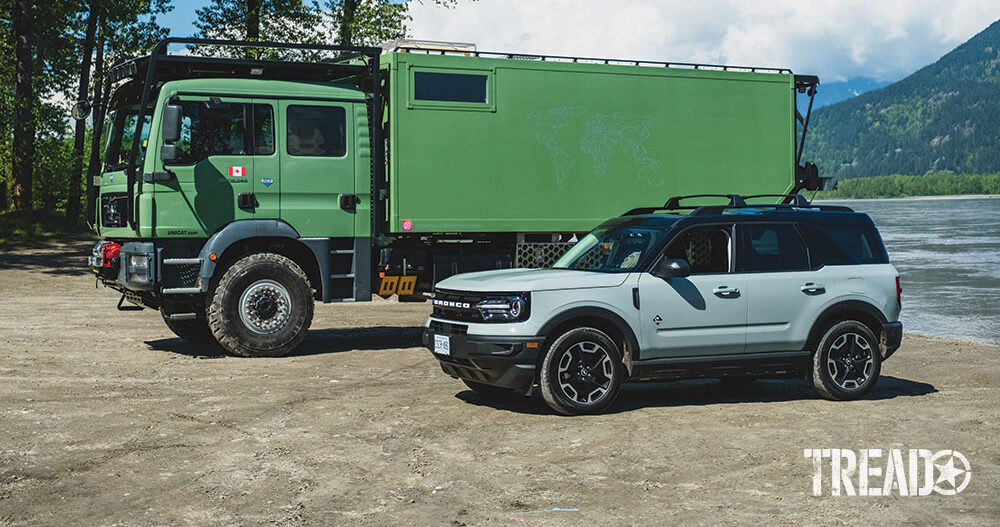 The new Bronco Sport might be dwarfed by the sheer size of the Unicat. Even so, both vehicles can offer similar travels in different ways and provide an outlet for adventure.

“To wake up somewhere remote in my own comfortable bed and then make breakfast and tea, all while gazing out the window from my warm, comfortable truck, is the greatest,” he explained. His goal was to spend as much time as possible with his beloved, mint-green machine. 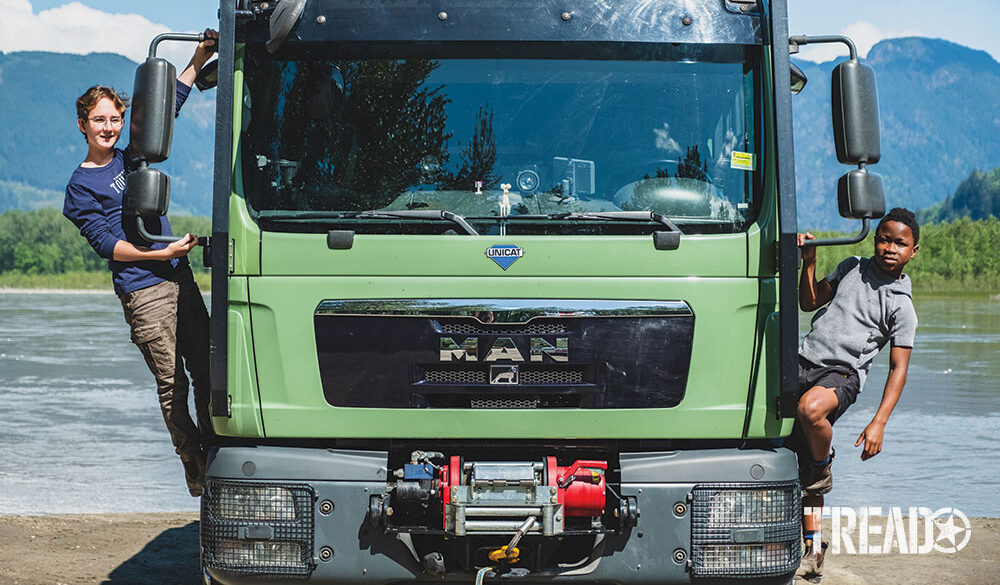 Leveille’s idea behind a move to a truck of this size? Spending time exploring international locales with his children and wife.

Leveille’s family comprises his wife, Carol, and their two sons, Nathan (12) and Nick (14). Their love for all types of vehicles binds them together … so much so that Nick is following in Leveille’s footsteps by building his own Land Cruiser FJ45.

Armed with a 5,100mm wheelbase (about 2,009 inches), eight-speed manual transmission and a 158-gallon diesel tank, Leveille’s mint-green crew cab MAN truck has been all over the world. This 4×4 boasts a 6.9L engine with 340 hp and 920 lb-ft of torque and includes stock front and rear differential lockers, central differential lock and a two-speed transfer case with off-road reduction.

‘Canada is vast! It has a diverse landscape and, if you’re willing to explore, you’re likely to be rewarded with great scenery, wildlife and, if you go far enough out, there’s often no one else around.’ —A.J. Leveille Off-road capability was important to Leveille and his family. In addition to the previously mentioned features, this MAN truck boasts Hutchinson aluminum wheels with internal beadlocks that allow ultra-low operating pressure. The wheels are shod with 14.00 R20 Samson GLO73A tires that offer strong tread blocks and reinforced ribs for durability, as well as a rounded-shoulder design to enhance off-road capabilities. While air brakes slow the truck, locking differentials in front and rear keep it moving forward when the going gets tough.

Although the Leveilles have pounded thousands of miles of pavement, they’ve had their fair share of off-road adventures too. They’ve tackled a variety of terrain in numerous countries. Leveille recalls rolling into a town in Argentina and commenting to his wife on how bad the road was … “only to have a brand-new Ferrari drive by at that exact moment.”

Oh, Canada (and Beyond)

Leveille resides just outside of Vancouver, British Columbia, and has a deep-seated love for his country: “Canada is vast! It has a diverse landscape and, if you’re willing to explore, you’re likely to be rewarded with great scenery, wildlife and, if you go far enough out, there’s often no one else around.” Should the need arise, the truck is equipped with a 20,000-pound hydraulic Superwinch—front and rear—with wireless remote control and in-dash switching available as well. 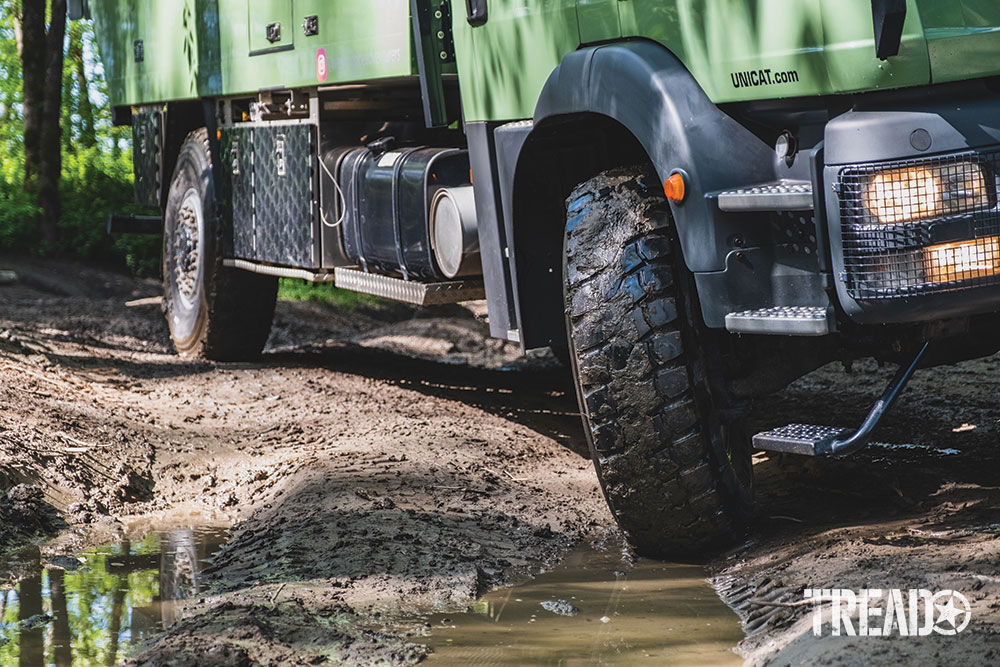 With a three-point sub-frame, the truck frame can flex a dramatic amount, thus providing great tire contact on the twisty bits.

Canada offers world-class wilderness, as other countries do, “but Canada’s edge is that it often allows great public access,” Leveille added. “Much of Canada is ‘crown land’—not private land—and can be used for recreation year-round.” 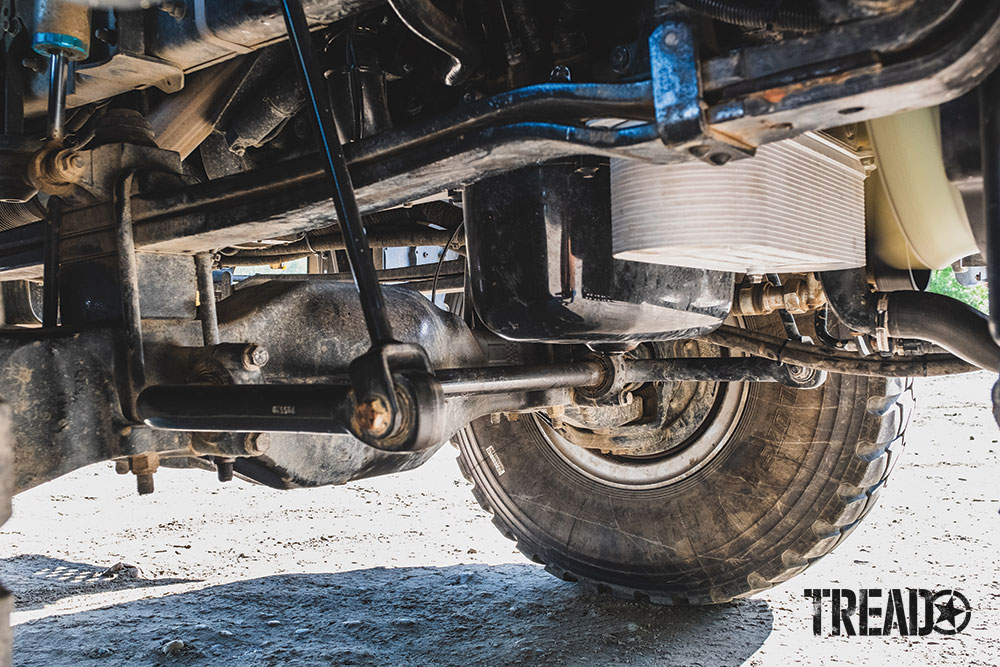 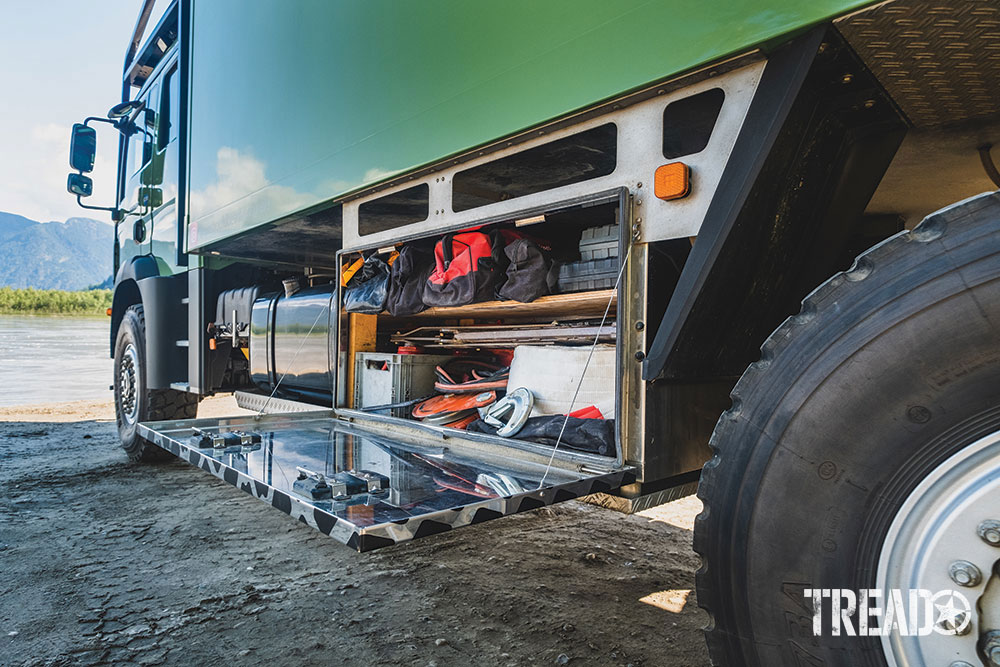 Tools and a solid assortment of recovery gear options are on hand to help when things don’t go as planned.

With two years of ownership under his belt, Leveille has put approximately 25,000 miles on his mint-green MAN truck. From Halifax to Vancouver, northern British Columbia to the Arctic Circle and even Chile to Tierra del Fuego (the tip of South America), this trusty truck has given Leveille and his family shelter, miles of smiles and constant adventure. 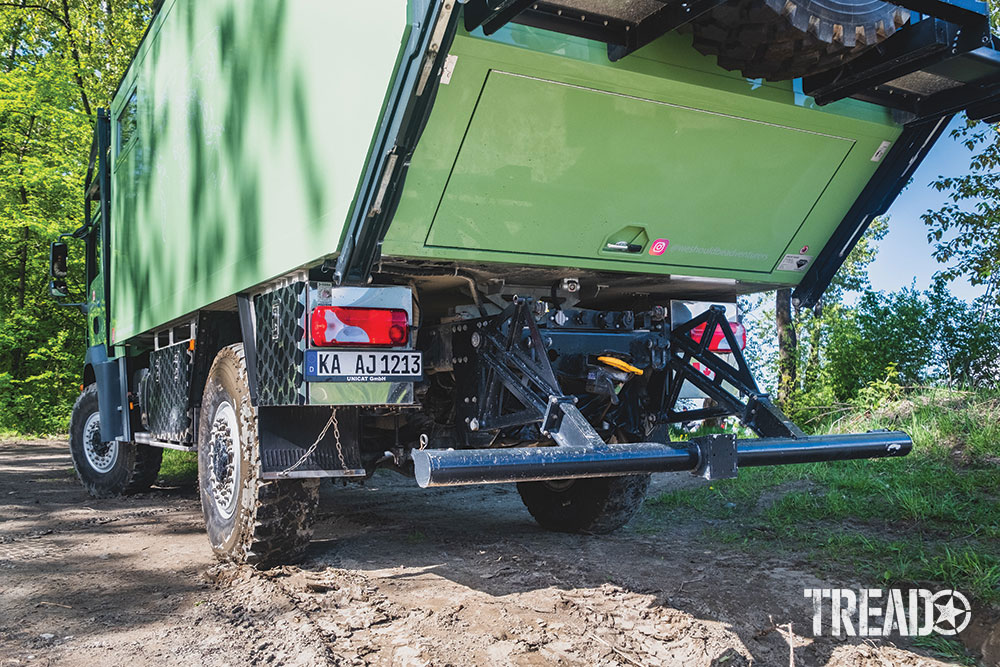 Because of its infinite list of features and amenities, Leveille’s MAN truck provided his family with flexibility, respite and time away from the everyday grind. A lockable pass-through from the cab to the Unicat camper, along with scratch-resistant, burglar-proof, hinged Unicat windows, adds security and protects their rolling home from prying eyes. 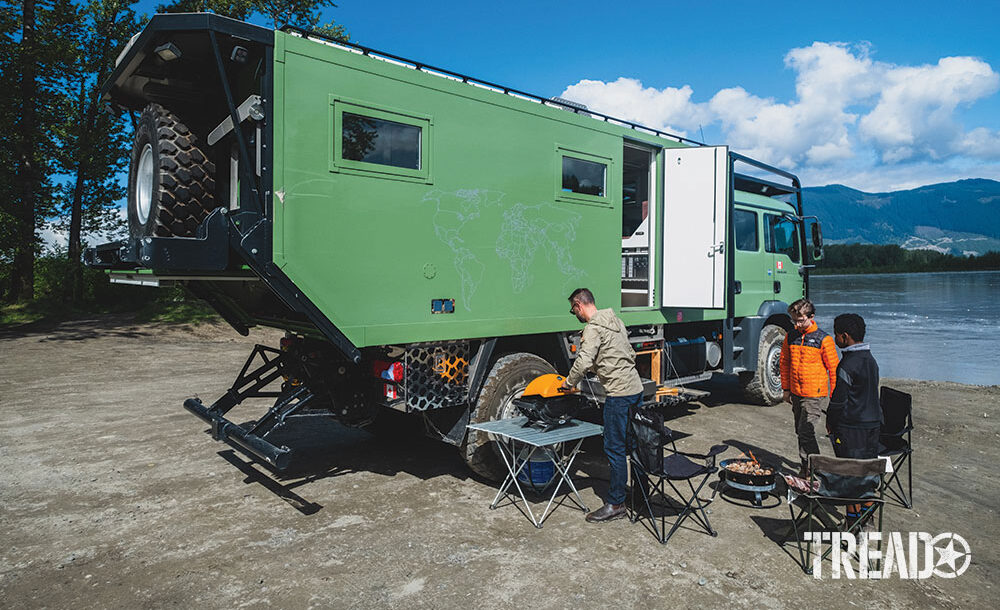 The Unicat unit features a seating area for up to six people and an adjustable swivel table on a pedestal in the front of the cabin. A double-sized bed includes suspension similar to a traditional box spring mattress and a heating element to help keep Leveille and his wife comfortable. The two boys enjoy the bunk beds that easily convert to a couch.

A comfortable sleeping area, a combination shower and toilet room, and an impressive kitchen all make for a solid, self-contained setup. The kitchen features an LPG 3-Force 10 three-flame stove with integrated oven, a 38-gallon fridge and 4-gallon freezer, as well as several drawers for dishes and cooking supplies with rattle-proof dividers.

Leveille’s love for adventuring through Canada’s vastness and beyond was a major reason he purchased and customized a used 2011 TGM 18.340 four-wheel-drive MAN truck that housed a TC59 Unicat camper. Leveille adds that with a MAN truck, there’s no camp to set up, and it’s 100 percent self-reliant. “You’re no longer bound by needing to reach a certain campsite.” A bright, airy design and all the comforts of home make this an easy place to unwind after a long day on the road.

The family has slept in fantastic spots, as well as challenging places, “but once the blinds are closed, it doesn’t really matter where you are when you have your house on the back.”

To Leveille, seeing his children continually expand their world view and find their own love of adventure and travel is highly gratifying. He says it’s the dreams of future travels that their MAN truck can bring that help them fuel their adventures. Heat, AC, solar and a generator keep this unit comfortable in all weather conditions—perfect for world travels.

However, adventuring with a mint green MAN truck isn’t like traveling with a Tacoma. It takes a lot of awareness to drive a truck this big. In addition, you aren’t immune to other mechanical problems.

The family has suffered mechanical issues throughout its travels. A fully functional kitchen with a Force 10 oven/cooktop and locking drawers with built-in dishes, pots and pans

“In Canada, a secondary serpentine belt broke, causing a sensor wire to sever and damage the cooling fan,” Leveille pointed out. “Luckily, the truck still ran, and we were able to order parts from Germany and repair it at home.”

In Chile, his fan shroud loosened and was destroyed; it was likely linked to the first issue in Canada. “Due to the remoteness and limited availability of parts, I needed to rely on my own mechanical abilities and ‘bush-fix’ it to get it going,” Leveille said. “That repair lasted until we got the truck back to Canada.”

Other misfortunes—such as blowing an intercooler or diving deep into various repairs to solve other issues—sometimes plagued the family while they were on the road.

“It’s my sincere hope that through COVID and your own struggles, you can find a slice of your own adventure daily—whatever that looks like for you.” —A.J. Leveille “With no one around here who works on these trucks, I was often left to sort out my own mechanical issues.” Nevertheless, he added that Unicat was great, and its staff helped get parts sent from Germany at a moment’s notice.

Ultimately, the problems Leveille’s mint green MAN truck suffered through paled in comparison to the experiences he and his family have had together. “One of the most important lessons is not taking life for granted and choosing to live each day to the fullest,” he said. “It’s my sincere hope that through COVID and your own struggles, you can find a slice of your own adventure daily—whatever that looks like for you.”

EDITOR’S NOTE: A version of this article originally appeared in the print issue of TREAD September/October 2021.